Hose Quick Connectors Are So Much Easier (and More Fun)

Hose quick connectors just might be something you’ve never seen. I did not know about them, and when I found out about them, got some, and tried them out, it was almost life-changing …

It’s finally summer, and we’ve gone from chopping ice and shoveling snow to watering the lawn and washing the car. We unroll the hoses and attach them to the outside faucets. Attaching them means screwing the hose on to the faucet and then screwing the sprinkler or nozzle of your choice to the other end. It’s great that water is not ice outside anymore, but hoses can be a pain. The hose is invariably at an awkward angle to the tap, so it’s hard to screw it on without skinning your knuckles. You have to get them tight enough not to leak, but not too tight to unscrew the next time. Once the hose is on, you’re tempted to leave it there instead of unscrewing it and putting it away. 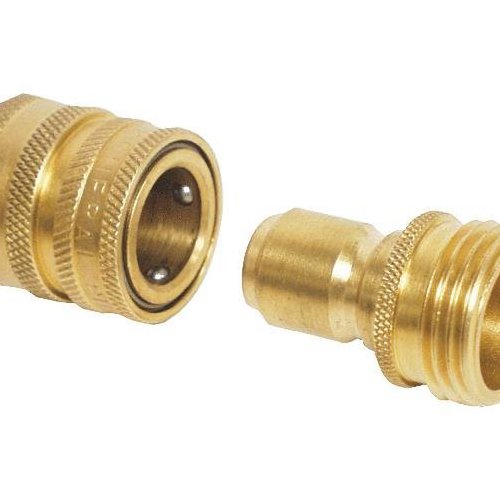 Hose quick connectors turn your hoses and fittings into the grown-up’s version of a child’s construction set – like Tinker Toy or LEGO. You break out the channel lock pliers to get them seriously tight and leakproof, then after that it’s suddenly fun to put the hose on, add fittings to the end, add another hose for more distance – you get the idea. With the water shut off, there is not a drop of water wasted when connecting or disconnecting.

You can get green plastic ones for cheap at your local hardware or big box home store, but I really like the look and feel of the brass ones. They have a ten year warranty, but that doesn’t matter much – they will last forever. The ones I got have a special gasket that might need to replace every other year or so, but your garden hose tasks will be so much easier and more enjoyable, you won’t mind.

This entry was posted in Outdoors, Tools. Bookmark the permalink.